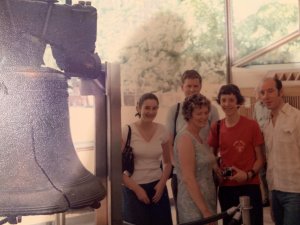 With my parents and sister at the State House Bell, better known since 1839 as the ‘Liberty Bell’, in 1978. Of course, the Bell was originally cast by the Whitechapel Bell Foundry in my home town of London.

My earliest childhood memories of America and Americans came from watching the blockbuster films of the early 1960’s, such as the Great Escape and the 633 Squadron, and from listening to my grandfather’s comments of his experiences in WWII as he moved through the western desert and up through Italy.  It is fair to say that his comments, in line with many of his generation, were often less than complimentary.  So, it was with more than passing interest that I looked forward to an International Scout Exchange that my family had been selected to participate in during 1977 and 1978.  The plan was that we would host both a Girl Scout, Linda, and Boy Scout, Larry, from Barrington, New Jersey (just across the River Delaware from Philadelphia) for a three-week period during the Queen’s Silver Jubilee celebrations in 1977 and that we would then travel to Barrington the following year.  Our guests arrived bearing gifts of Salt Water Taffy and other US candy and we had a busy 3 weeks showing them the sights of London and camping on the south coast of England.  They both appeared to have a great time and we exchanged a few letters and the occasional phone call prior to traveling to the US the following year.  Our visit was a real ‘eye opener’ to the size and scale of the US.  From arrival at JFK airport one could not fail to be impressed by the skyscrapers and gas-guzzling vehicles that appeared ubiquitous.  Our visit included a tour of Independence Hall and a trip to Washington DC, encompassing a tour of the US Capitol and a visit to the USMC Barracks on 8th and I Streets for the Sunset Parade; an event that stands out in my memory even today.  The visit included many other adventures and piqued my interest in the US.  Whilst I got on OK with Larry, we had little in common and did not stay in touch.  However, my parents and sister, who were being hosted by Linda’s family, had a completely different experience and, very quickly, common interests and shared experiences turned into a special bond.  My parents got on very well with Linda’s parents and, despite the presence of 8 teenagers in the house, it was a very chilled environment. 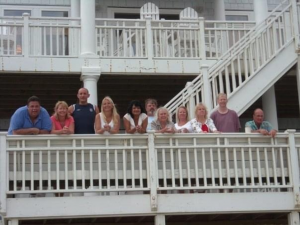 The relationship was quick to develop and I spent 2 of my next 3 summer holidays with Linda’s family as I forged a great friendship with her younger brother Greg and younger sister Anne.  During this time, I developed an appreciation for the NFL and MLB and began following the Eagles and Phillies.  Linda’s boyfriend, Gerry, took me to my first games, a Jaworski vs Bradshaw classic at the Veterans Stadium and to see a Phillies team including Pete Rose.  Regular trips back and forth across the Atlantic ensued for all members of the families. Initially, their visits were to London but after I joined the Royal Air Force in 1982, they began to enjoy visits to multiple locations throughout much of the UK and western Europe, whilst my family explored much of the eastern seaboard.  I was with Linda and her family in August 1990 when Iraq invaded Kuwait and when I subsequently deployed to the Middle East for the duration of the Gulf War in 1991, Linda’s family was amongst the first to send letters and packages and they even held a birthday party for me.  Regular visits continued and, following an extended deployment to CENTCOM in 2009, we rented a 10-bedroom, 9-bathroom beach house on the Outer Banks.  Despite cramming 27 of us into that beach house for a week, it remains one of my best ever holidays with never a cross word heard. 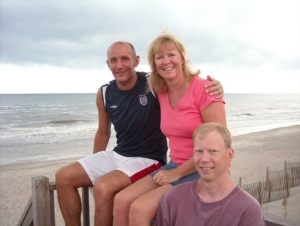 With Linda and Greg.

More recently their visits have extended to South Africa whilst I was assigned there and the timing of every 2 to 3 years became every couple of months when I was assigned in Washington DC.  My 6 years spent in the US enabled my family to really get to know the younger generation of their family and to ensure that what started as a short exchange visit will endure for generations to come.  Every Thanksgiving we were invited to spend the holiday with up to 30 family members present.  A highlight of the time spent in the US was the period around 4 and 8 February 2018.  Both days will live in my memory for a very long time.  On 4 February, the Eagles beat the Patriots 41-33 to win the Super Bowl in an amazing game and on 8 February we joined the family for the parade through Philadelphia.  Sharing the Eagles first Super Bowl win with Gerry, who had taken me to my first game 40 years earlier, was very poignant.  In May 2019, the family hosted a farewell party as we returned to the UK.  The party was held in the very house that I had first visited 41 years earlier.  Nothing much had changed; except the loss of one generation and the addition of two further generations of the family. 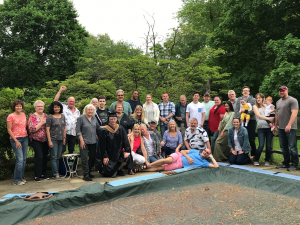 Four generations of the family bid us farewell from the US in May 2019.

The friendship has thus far spanned 43 years and 5 generations and shows no signs of abating.  Obviously, there have been long periods when we did not see each other but we now all treat each other as family members.  Members from one or other family have been present at 8 weddings over the years and my children are included as grandchildren amongst Linda’s mum’s other 18 grandchildren.  Of course, modern technology has helped and FaceTime has ensured that our children and grandchildren are able to nurture their own close friendships.  Whilst this may not be ‘The Special Relationship’ it is definitely a special relationship and serves to show that there is a natural bond between individuals in both countries. Finally, it is worth noting that many relationships from that Boy Scout exchange in 1978 still endure although, unlike ours, most are limited to the original individuals. 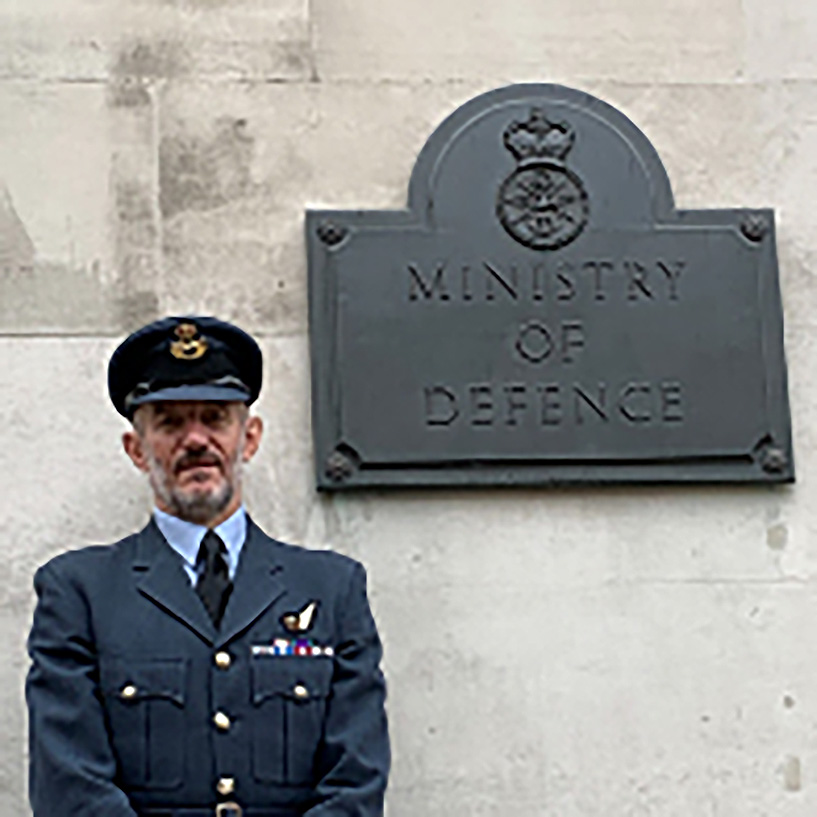 Clive Mitchell joined the Royal Air Force in 1982.  On completion of both Initial Officer and Navigator Training he was assigned to a Canberra squadron operating in the Target Facilities role.  In 1988 he re-roled to the Tornado GR1 ground attack aircraft and subsequently spent 3 ½ years at RAF Bruggen, in Germany, during which time he deployed to Dhahran, Saudi Arabia, for the duration of Operation GRANBY.  Airborne on the first night of the campaign, he flew 18 missions delivering a variety of munitions against a varied target set.  In 1993, Mitchell was posted to the Strike Attack Operational Evaluation Unit where he was involved in the development of operational tactics for the Tornado GR force and also trialed a variety of weapons, reconnaissance sensors and electronic warfare systems prior to their entry to Service.

Promoted to Squadron Leader in 1996, Mitchell endured a brief ground assignment at the Headquarters of Military Air Traffic Operations before returning to active flying duty with the Tornado GR1 fleet as the Executive Officer on 617 Squadron.  During this tour he undertook numerous deployments to the Middle East in support of operations enforcing the UN No-Fly Zones over southern Iraq.  Following this tour Mitchell conducted Advanced Command and Staff Training and, on completion, was assigned to the Staff.

In February 2004, Mitchell took Command of 39 Squadron, flying the Canberra PR9 in the strategic reconnaissance role.  Over the next 2 ½ years much of his time was spent flying operations over Afghanistan.  A posting to the Operations Directorate at the Ministry of Defence in London followed.  As part of the Global Current Commitments Team, Mitchell was responsible for the provision of politically aware military advice to Ministers, other Government departments and Chiefs of Staff and for providing military strategic direction and planning guidance to the Permanent Joint Headquarters at Northwood.

In January 2009, Mitchell was deployed on an out-of-area operational tour to the Headquarters United States Central Command, Tampa Bay, Florida, where he dealt with military options for dealing with emergent world issues.  From February 2010 to May 2013, Mitchell was the Deputy Defence Adviser at the British High Commission in Pretoria with the lead for air and naval issues.  In May 2013, Mitchell joined the Air Staff at the British Defence Section United States in the British Embassy in Washington DC. His responsibilities included administration of the RAF personnel engaged in the Military Personnel Exchange Programme, support to equipment procurement initiatives and other Defence Engagement activity.  Accordingly, he worked closely with USAF, USMC, USN and US Army personnel.  Mitchell retired from the RAF on 31 October 2019 but immediately joined the RAF as a Full Time Reservist and currently works on a front-line RAF Station in support of Typhoon operations.

A Chat With Peter Caddick-Adams

The Ties That Bind, by Johnny Wheeler
Scroll to top