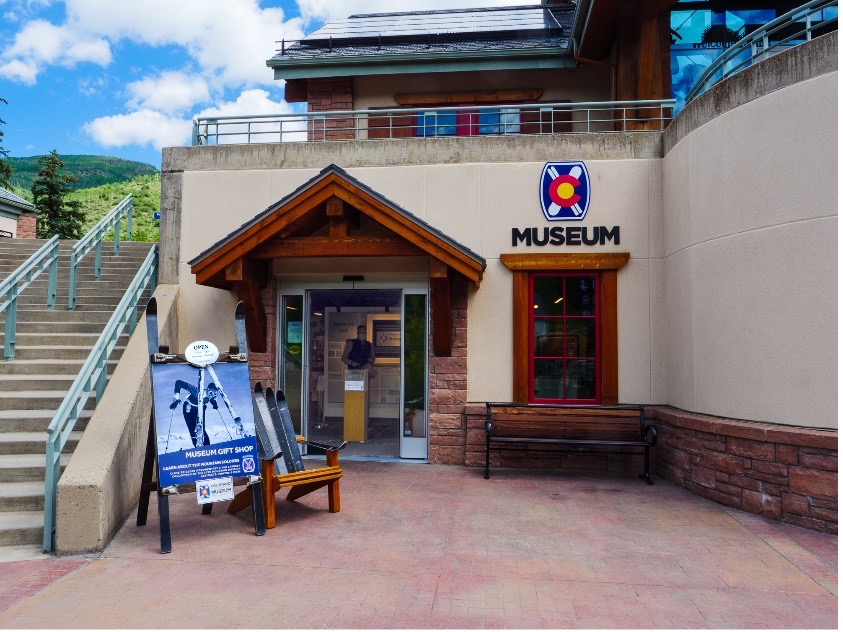 From Mikaela Shiffrin and Lindsey Vonn memorabilia to artifacts from Benito Mussolini’s villa captured by the 10th Mountain Division and the first U.S. Ski Team Olympic parade coat from 1924, the Colorado Snowsports Museum (CSM) and Hall of Fame is a place to dive deep into the unique history of Colorado snow sports and the 10th Mountain Division that helped build the ski industry after World War II.

The Museum features six displays including “Climb to Glory” about the 10th Mountain Division, “Vail’s DNA”, the Colorado Snowboard Archive, ski fashion, and the Colorado Snowsports Hall of Fame, among many others.

Founded in 1975 and located in Vail, Colorado, the Colorado Snowsports Museum and Hall of Fame’s mission is to celebrate Colorado snow sports by telling stories that educate and inspire others to seek adventure. The priceless artifacts they preserve and display tell the story of the birth, rise and explosion of skiing and snowboarding in Colorado. In telling these stories, the CSM celebrates the many people that impacted the snow sports industry. 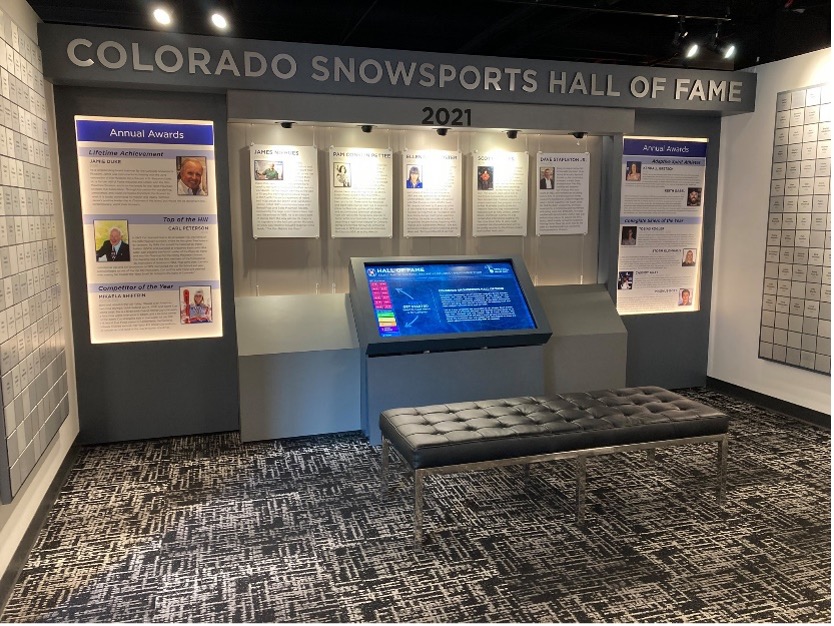 The CSM is home to the Colorado Snowsports Hall of Fame exhibit — featuring the current Class as well as all inductees in our digital database.

As the name implies, the Colorado Snowsports Hall of Fame was created in 1977 to honor “Coloradoans”. Nominees must have contributed significantly to the sport and industry of skiing and snowboarding in the State of Colorado. The accomplishments of the individual must have had a direct benefit to Colorado, whether through competition, by encouraging growth of the sport in the State or by exporting ideas, talent, techniques, or products developed within the state that went on to have national or international significance.

Although the Colorado Snowsports Hall of Fame includes over 200 individuals, the CSM is by no means done honoring the leaders and pioneers of our industry. With this, they look to the public to help nominate people deserving of recognition for their contributions. For the Class of 2022, the Billy Fiske Foundation would like to nominate William Meade Lindley Fiske III, aka Billy Fiske.

For the Class of 2022, the Billy Fiske Foundation would like to nominate William Meade Lindley Fiske III, aka Billy Fiske.

Fiske was born in Chicago on June 4, 1911, the son of a successful international banker whose family could trace their American roots back to the Mayflower. He wouldn’t live to see his 30th birthday but managed to leave a lasting legacy. 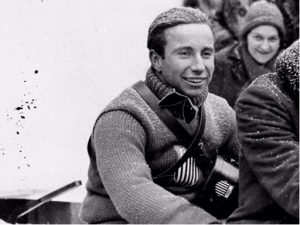 At 13, his family moved to France, he attended private schools in England, and developed an early keen interest in sports and speed. During his winter holidays in Switzerland, he took up bobsleighing and cresta. He held the record for the famous Cresta Run at St Moritz and in 1928, at the age of just 16, he was given a place as driver in one of the American five-man bobsleigh teams in the Winter Olympics (the only year that there were five people on the teams). In 1932, he was made captain of America’s four-man bobsleigh team and carried the US flag at the opening ceremony at Lake Placid, NY. At both Olympics Fiske’s team won the Gold Medal. Fiske would remain the youngest Winter Olympic champion for another 60 years. It is likely Fiske could have gone on to win a third consecutive gold in 1936, but while his was invited to compete, he made the decision to boycott the Nazi-organized Games in Garmisch-Partenkirchen.

A lifelong Anglophile, Fiske moved to England after the 1928 Olympics, to study economics and history at Trinity Hall, Cambridge and after graduating, Fiske took up a post with the international bankers Dillon, Reed, & Co., working mainly in Europe. This gave him the chance to indulge and develop his sporting interests, and his growing love of England and the British people. He became a member of the exclusive White’s Club in London, where he met and socialized with many members of No.601 Squadron, Auxiliary Air Force.

Instead of competing in the 1936 Winter Olympics that same year, Fiske, and a close friend, began the development of what would become the ski resort at Aspen, in the Rocky Mountains of Colorado. In 1932, at a cocktail party in Los Angeles, Aspen native TJ Flynn, with mining claims to sell, met Olympic gold medal Bobsledder Billy Fiske, who, along with Ted Ryan of Aspen, wanted to see an American resort to rival Europe’s finest. They settled on the Castle Creek Valley near Aspen.

The Highlands-Bavarian Lodge opened in 1936 and operated ski tours in the valley. Guests would climb the surrounding mountains and ski down, back to the lodge at the confluence of the Conundrum and the Castle Creeks. Fiske and Flynn—along with Ryan—proposed Colorado’s first major ski area on the slopes of Hayden Peak with the grand ambition of an aerial tram that would reach all the way to the 13,000-foot saddle south of Hayden Peaks’ summit—covering 3.2 miles of slope with a vertical rise of 4,000 feet. André Roch and Italian Günther Langes surveyed the east slopes of Hayden Peak, and the following year Flynn’s company obtained title to the ghost town of Ashcroft. A year later, the route of the aerial tram was surveyed. Ted successfully lobbied the Colorado Legislature to issue $650,000 in bonds for this valley-to-peak tramway, and a 1936 brochure, written by columnist Robert Benchly and entitled How to Aspen, sought endorsements and investors for the project.

The Highland-Bavarian Corp. was about to get its first chairlift when the United States entered the Second World War, and all steel orders were cancelled by the government. By that time, Fiske had been killed fighting with the Royal Air Force in the Battle of Britain, and with the inspirational heart of the plans gone, their plans came to an end. But, after the war, the focus would shift to the town of Aspen where an infrastructure already existed and the spirit of the dream of Fiske, Flynn, and Ryan would be realized. To this day, Billy Fiske is remembered as a hero of the Battle of Britain and his memory lives on in the mountains of Colorado. For these reasons, we hope to see Fiske join the Hall of Fame.

To this day, Billy Fiske is remembered as a hero of the Battle of Britain and his memory lives on in the mountains of Colorado. For these reasons, we hope to see Fiske join the Hall of Fame.

This ski season, the Colorado Snowsports Museum welcomes Kevin Billings, President of the Billy Fiske Foundation, for their exciting programming series Through the Lens. Join Kevin on March 30, 2022, at 5:30pm at the CSM located in Vail, Colorado as he presents a talk on the fascinating life of Billy Fiske and his connection to Aspen. Visit our website for more details: https://www.snowsportsmuseum.org/events-programs

Download and review our Hall of Fame nomination packet: https://www.snowsportsmuseum.org/hall-of-fame

Learn more and consider supporting the Museum by becoming a member: https://www.snowsportsmuseum.org. 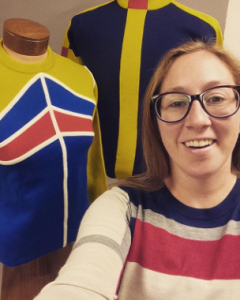 Dana Mathios, Curator and Director of Collections has been with the Colorado Snowsports Museum and Hall of Fame for just over six years. She brings a breadth of knowledge to her position as she’s been working with museums for over a decade. Dana’s expertise lies in collection management, preventive care for artifacts, and exhibition development. In more recent years, Dana has become interested in object-driven exhibits and thinks it’s important to let the artifacts tell the many stories behind them. In using this process, she has become familiar with Colorado’s rich snow sports heritage and is now eager to help share and celebrate these stories — better preserving them for generations to come. In her personal life, Dana enjoys camping, biking, hiking, snowboarding, podcasting, craft beer, and cooking. She grew up in the Midwest, but has called Denver her home for 10 years.

The Forgotten Few of the Fleet Air Arm — Battle of Britain, Paul Beaver by...

Merry Christmas from the Billy Fiske Foundation!
Scroll to top