William Meade Lindley Fiske III was born in Chicago on June 4, 1911, the son of a successful international banker whose family could trace their American roots back to the Mayflower. He wouldn’t live to see his 30th birthday, but managed to leave a lasting legacy. 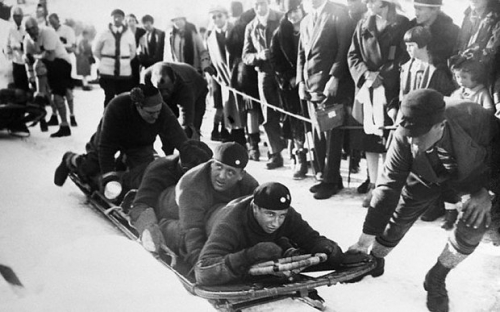 At 13 his family moved to France, he attended private schools in England, and developed an early keen interest in sports and speed. During his winter holidays in Switzerland he took up bobsleighing and cresta. He held the record for the famous Cresta Run at St Moritz and in 1928, at the age of just 16, he was given a place as driver in one of the American five-man bobsleigh teams in the Winter Olympics (the only year that there were five people on the teams). In 1932 he was made captain of America’s four-man bobsleigh team, and carried the US flag at the opening ceremony at Lake Placid, NY. At both Olympics Fiske’s team won the Gold Medal. Fiske would remain the youngest Winter Olympic champion for another 60 years. It is likely Fiske could have gone on to win a third consecutive gold in 1936, but while his was invited to compete, he made the decision to boycott the Nazi-organised Games in Garmisch-Partenkirchen.

A lifelong Anglophile, Fiske moved to England after the ’28 Olympics, to study economics and history at Trinity Hall, Cambridge and after graduating, Fiske took up a post with the international bankers Dillon, Reed, & Co., working mainly in Europe. This gave him the chance to indulge and develop his sporting interests, and his growing love of England and the British people. He became a member of the exclusive White’s Club in London, where he met and socialised with many members of No.601 Squadron, Auxiliary Air Force. In 1938 he met Rose Bingham, the former Countess of Warwick, whom he later married. Encouraged by his new friends in 601 Squadron, he also learned to fly.

Fiske was also an automotive sportsman. His obsession with speed found an outlet in his 4.5 litre open Bentley that he drove at notorious speed. He would drive fellow golfers the 24 miles to Mildenhall in Suffolk in just 17 minutes, often reaching 110mph on the winding country roads. His need for speed led him to also take part in numerous driving rallies and competitions, including the Le Mans 24 Hour Race when he was just 19. He later ordered a British Racing Green 1930 Bentley 4½-Liter Supercharged (a “Blower Bentley”) to the same specifications as Sir Henry Birkin’s LeMans racing team cars. He drove it to an average speed of 121.4 miles per hour (195.4 kilometers per hour) at Brooklands’ 2¾-mile high banked track, for which he was awarded the Outer Circuit Banking Badge.

Instead of competing in the 1936 Winter Olympics, that same year, he and a close friend began development of what would become the ski resort at Aspen, in the Rocky Mountains of Colorado.  In 1932, at a cocktail party in LA, Aspen native TJ Flynn, with mining claims to sell, met Olympic gold medal Bobsledder Billy Fiske, who, along with Ted Ryan of Aspen, wanted to see an American resort to rival Europe’s finest. They settled on the Castle Creek Valley near Aspen.  The Highlands-Bavarian Lodge opened in 1936 and operated ski tours in the valley. Guests would climb the surrounding mountains and ski down, back to the lodge at the confluence of the Conundrum and the Castle Creeks.  Fiske and Flynn—along with Ryan—proposed Colorado’s first major ski area on the slopes of Hayden Peak with the grand ambition of an aerial tram that would reach all the way to the 13,000-foot saddle south of Hayden Peaks’ summit—covering 3.2 miles of slope with a vertical rise of 4,000 feet.  André Roch and Italian Günther Langes surveyed the east slopes of Hayden Peak, and the following year Flynn’s company obtained title to the ghost town of Ashcroft. A year later, the route of the aerial tram was surveyed. Ted successfully lobbied the Colorado Legislature to issue $650,000 in bonds for this valley-to-peak tramway, and a 1936 brochure, written by columnist Robert Benchly and entitled How to Aspen, sought endorsements and investors for the project.  The Highland-Bavarian Corp. was about to get its first chairlift when the United States entered the Second World War and all steel orders were cancelled by the government. By that time, Fiske had been killed fighting with the Royal Air Force in the Battle of Britain, and with the inspirational heart of the plans gone, their plans came to an end.  But, after the war, the focus would shift to the town of Aspen where an infrastructure already existed and the spirit of the dream of Fiske, Flynn and Ryan would be realised.

(RAF) The Royal Air Force and The Battle of Britain

When Britain declared war, Fiske became one of the first to volunteer.  He wrote of his motives “The English have been damn good to me in good times so, naturally, I feel I ought to try and help out in bad (times) if I can. There are absolutely no heroics in my motives, I’m probably twice as scared as the next man, but if anything happens to me I at least feel I have done the right thing in spite of the worry to my family—which I certainly couldn’t feel if I was to sit in New York making dough.”

He was under no obligation to do so and in fact risked severe penalties should the US authorities choose to pursue and charge him with ‘fighting for a foreign power’.

This risk was compounded as, at that time, the Royal Air Force was not interested in recruiting non-British and non-Commonwealth citizens and Billy had to weave a complex story in order to pass himself off as Canadian.  He was interviewed by no less than the Chief of Air Staff, the senior airman, Air Marshall Sir Cyril Newall, and accepted for the Auxiliary Air Force. Despite being a pilot already he had to follow the military training programme and was posted to No 10 Elementary Flying Training School, Yatesbury, Wiltshire, for military flying training in the Tiger Moth, and then No 2 Flight Training School, Brize Norton, Oxfordshire. Later training was in the Gloster Gladiator, the Royal Air Force’s last biplane fighter. While there he lodged his wife nearby at Minster Lovell.

On 23 March 1940, Billy Fiske was granted a commission as an Acting Pilot Officer on probation, Royal Air Force Volunteer Reserve (78092). He joined No 601 (County of London) Squadron at RAF Tangmere on12 July 1940.  Fiske should have felt immediately at home as 601 had a history of recruiting from the members of Whites’ Club in St James’, in London’s clubland, and most of its core members had private means and came from prestigious families.  601 was one of the most prestigious outfits in the Royal Air Force – the so-called “Millionaires’ Mob’. It gained its nickname for filling its ranks mainly with the ‘well-heeled’. Like the adventurer Fiske, most of these affluent young pilots had little regard for the rigid discipline of the regular service; they lined their uniform tunics with bright red silk and wore dark blue ties rather than the regulation black. “Black is so morbid, we’ll only wear it for funerals,” said one of the leaders. They played polo on brand-new motorcycles, drove fast sports cars, and most of the pilots owned their own private aircraft.

But apparently Fiske was preceded by a playboy image and there was some doubt that he would be able to pull his weight. But within days his engaging character and above-average flying skills ensured that he was fully accepted. Unusually he had been posted to 601 without having flown a Hurricane and his first flight in one was on the 14 July. He had only accumulated eleven hours on this aircraft when he flew his first operational sortie on 20 July.  Between 20 July and 16 August, Pilot Officer Fiske flew 42 sorties, not a record but an indication of the pace of the Battle over the English Channel.

On 11 August, Billy Fiske claimed a twin-engine Messerschmitt Bf 110 shot down. On 13 August, he claimed another Bf 110 probably shot down and two more damaged. On 15 August, Fiske and his Hurricane forced a German bomber into a balloon barrage. A day later the Squadron was scrambled to intercept a formation of Ju 87 Stuka dive-bombers that were in fact heading for 601’s base at Tangmere. Individual combats broke out as the Stukas dropped their bombs on the airfield and headed out to sea over Pagham harbour.

Fiske’s Hurricane P3358 was hit, presumably by return fire from a Stuka’s gunner, but though the engine had stopped Fiske was able to glide over the airfield boundary and make a wheels-up landing. The aircraft immediately burst into flames. Two ground crew, Corporal G W Jones and AC2 C G Faulkner, drove an ambulance over to the aircraft, unstrapped Fiske and lifted him out. They had to extinguish a fire in his lower clothing before placing him on a stretcher and driving to the medical building. Minutes earlier this building had received a direct hit and had been extensively damaged.

Interviewed in 2003, the Medical Officer, the late Flying Officer Courtney Willey explained that he was inside and had been crushed by the chimney breast falling on him. Injured, but saved from a fatal blow by his tin helmet, he emerged from the ruins to be confronted by Jones and Faulkner bringing the stretcher bearing Fiske to him. With both eardrums punctured by the blast, Willey had to convey to them by sign language to take Fiske to nearby Chichester Hospital. He first administered a dose of morphine but said that he was very pessimistic about Fiske’s chances of survival due to the severe burns to his lower body.  Fiske died the next day at the hospital. He was 29 years old.  Billy Fiske’s Hurricane, which he had struggled to save, rather than bailing out, was repaired and was operational again within a few days.

Fiske’s funeral took place on 20 August 1940 at the nearby Boxgrove Priory Church, just across the (now) A27 from Tangmere. Fiske’s colleagues being in action, as they were most days, the

coffin was borne into the churchyard by six members of the ground staff at Tangmere. It was a  major event which attracted widespread publicity and newsreel coverage, including the personal attention of the new British prime minister, Winston Churchill.

In a later ceremony a memorial was unveiled to Fiske at St Paul’s Cathedral in London on 4 July 1941. This was a singular honour in which Churchill’s hand can again be seen. At the presentation, Sir Archibald Sinclair, Secretary of State for Air, said, “Here was a young man for whom life held much. Under no compulsion he came to fight for Britain. He came and he fought, and he died.”  The plaque reads, “An American citizen who died that England might live.” 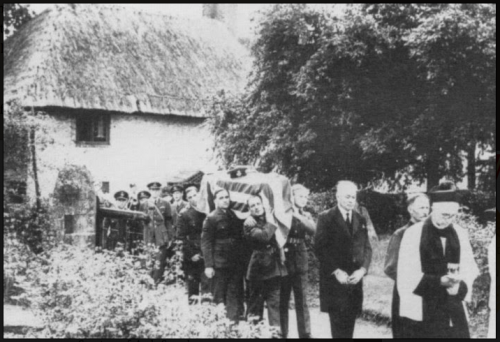 Fiske’s flight commander, Flight Lieutenant Sir Archibald Hope, wrote, “Unquestionably Billy Fiske was the best pilot I’ve ever known. It was unbelievable how good he was. He picked up so fast it wasn’t true. He’d flown a bit before, but he was a natural as a fighter pilot. He was so terribly nice and extraordinarily modest and fitted into the Squadron very well.”

So ended the extra-ordinary life of Billy Fiske. He will always be remembered in Britain and his memory will continue to strength the trans-Atlantic partnership.