An Anglo-American Hero, by William Cook

Billy Fiske, the volunteer pilot who died to save Britain

Reprinted from the September, 2020 issue of the Spectator USA. 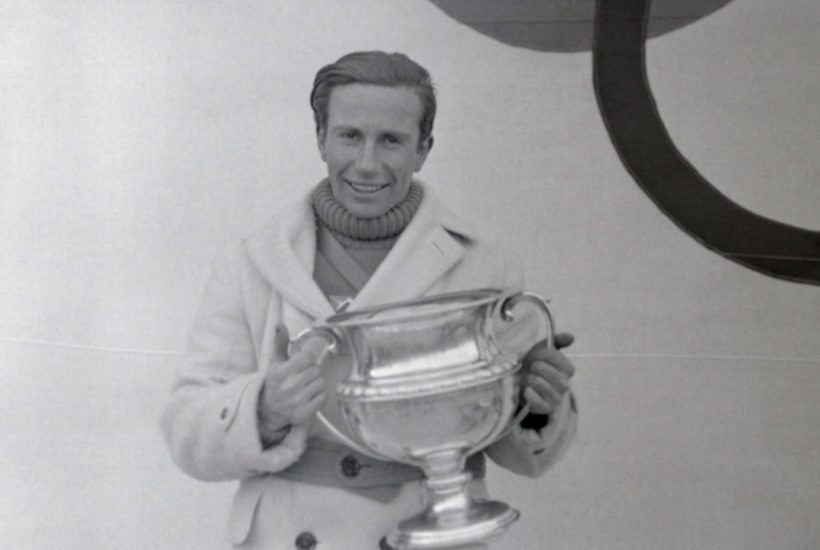 Fiske was one of 11 American pilots who served in RAF Fighter Command during the Battle of Britain. While every one was a hero, Fiske’s story is particularly newsworthy. It inspired a stage play and a documentary — it would make a splendid movie. And now a group of Britons and Americans are striving to get a statue of him erected in London, in the land he gave his life to save.

In an age when statues of dead white men are coming under increasing scrutiny, this new memorial would be welcome (and entirely uncontentious). For Billy Fiske doesn’t just epitomize the sacrifice that so many young men made to liberate Europe from Nazi tyranny. He also epitomizes the unique, enduring friendship between the United Kingdom and the United States.

William Meade Lindsley Fiske III was born in 1911 in Chicago, the son of a banking magnate from New England. His family was wealthy enough for winter vacations in Switzerland, and it was there that Billy discovered bobsledding. At the 1928 Winter Olympics in St Moritz, he won gold for the USA in the five-man bobsled. Aged 16, he was the youngest ever Winter Olympic champion, a record that lasted for 60 years. After this triumph he went to Britain, to study history and economics at Trinity Hall, Cambridge. He then landed a prestigious job in the London office of an American bank, and became a member of London’s smartest club, White’s.

In 1932 Fiske won gold again, in the four-man bobsled at the Winter Olympics in Lake Placid. He might well have won a third gold medal in 1936, at Hitler’s Winter Olympics in Garmisch-Partenkirchen, but he declined to take part. Instead, Fiske teamed up with a wealthy pal called Ted Ryan (a scion of the Thomas Fortune Ryan dynasty) to set up a pioneering ski resort in an old mining town in Colorado. In 1938 he married Rose Bingham, one of the most beautiful and desirable women in English high society. Life could hardly have been any better.

In 1939, as war in Europe became increasingly likely, Fiske’s bank recalled him to New York. Yet a few days before Britain went to war, Fiske returned to England and joined the RAF — a serious breach of the US Neutrality Act, which forbade all US citizens from enlisting in the armed forces of any country in the conflict (Fiske told the RAF he was Canadian). He could have sat out the war in comfort — the prospect that America might join the conflict any time soon was extremely slight — yet he jeopardized his US citizenship, forsook his liberty and pledged his loyalty to King George VI.

Why on earth did he do it? He was clearly no fan of Hitler but, as with most good deeds, his motives seem more personal than ideological. He’d made friends in Britain, acquired a British wife and had a lot of good times there. Now Britain was in peril, it seemed unsporting to run for cover.

He joined 601 Squadron, the so-called ‘Millionaires’ Squadron’, a debonair reserve force founded in 1925 by a group of wealthy amateur aviators (they played motorcycle polo and adorned their flying jackets with red silk linings). Fiske soon proved himself a natural flyer. His bobsledding stood him in good stead.

Fiske’s war was short. On August 16, 1940, 601 Squadron intercepted some German Stukas, and in the ensuing dogfight his Hurricane was shot through the fuel tank. The engine cut out but, though he was badly burnt, he managed to glide his crippled airplane back to base (he knew that planes, more than pilots, were in desperately short supply). He died the next day in hospital, aged 29. His Hurricane was flying again a few days later. If he’d bailed out, and lost the plane, he might have saved his life. Greater love hath no man than this, that a man lay down his life for his friends.

Fiske’s funeral attracted considerable publicity, and a year later a plaque was unveiled in his honor at St Paul’s Cathedral, London, in the heart of his adopted homeland. ‘Here was a young man for whom life held much,’ said Britain’s Secretary of State for Air, Sir Archibald Sinclair, at the ceremony. ‘Under no compulsion he came to fight for Britain.’ The inscription on the plaque read: ‘An American citizen who died that England might live.’

‘He represents everything that is good about the relationship between Great Britain and the United States,’ says Hon. Group Captain Kevin Billings of 601 Squadron today. ‘Freedom and democracy and fair play are values that both the United States and Great Britain stand for.’ Billings, an American, served as Assistant Secretary of the US Air Force under President George W. Bush. He’s worked closely with the RAF and is president of the Billy Fiske Foundation, which is raising funds for a statue and other Anglo-American cultural projects. For him, Fiske personified the values the UK and the US share.

So what does Fiske’s inspiring story teach us about the world today? Well, I guess you could be forgiven for wondering if young men of Fiske’s caliber still exist on either side of the Atlantic, but I like to think there’s a more hopeful lesson to be learnt. Until duty called him, Fiske was a remarkable young man, yet before 1939 no one would have called him a hero. Brave? Certainly. Brilliant? Probably. But heroic? No. Yet when the call came, he answered it. As Billings says: ‘Billy Fiske used his privilege for good.’ Maybe in a comparable crisis, the privileged young men of our own age might prove more selfless than we suppose.

Until that crisis comes, a new statue would be a fitting reminder — not just of Fiske’s sacrifice, but the transatlantic ties that prompted it. ‘The reason that the relationship between the two nations is so strong is because, as individuals, we have very strong friendships,’ says Billings. ‘We share many, many common values — and that’s a good thing for the world.’ That ‘special relationship’ between Britain and the US has been sorely tested lately, and no doubt it will be tested again in future, but if, between them, these two countries can produce more young men and women like Billy Fiske, it’ll surely survive.

And until that British statue materializes (like everything else, it’s been delayed by the pandemic), there are American monuments to relish: a memorial tablet in the Cathedral of St John the Divine in New York, and the Billy Fiske Memorial Trophy, awarded annually by the USA Bobsled and Skeleton Federation to the four-man bobsled team that win the national championship.

But for me, the most fitting tribute to Billy Fiske is the ski resort he founded, in that old mining town in Colorado. The name of that town? Aspen.

This article is in The Spectator’s September 2020 US edition.

‘Comrades in Arms’ by Philip E. West
Scroll to top