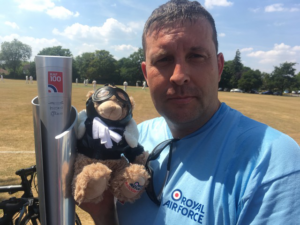 Mark James, along the route of the RAF100 Baton Relay with Bertie Bear (the mascot) and the baton.

The Foundation met Mark James through our social media posts. Mr. James is considered a true and faithful friend to the Billy Fiske Foundation and can be found at Billy’s grave most every 17th of August, as well as on other occasions. Mr. James tends to Billy’s grave, keeping it clean as well as adorning the grave with US and UK flags. We caught up with Mark and asked him a few questions.

Mark, what do you do for a living?

I’m a broadcast engineer by trade.

How did you get involved in WWII history?

I began by visiting the D-Day landing sites in 2001. I loved the history, soaking it up like a sponge. I visited all the D-Day sectors and was very moved. One particular year, I ended up at the Pegasus Bridge Café, perhaps in 2004, and found the café swamped and the staff were rushed off their feet. So, I helped out. Collecting the rubbish, beer glasses, and ended up washing up. To Arlett’s (the owner) surprise, I’ve been doing this every year now, usually on the 5th or 6th of June. I’ve done this annually, so often that I feel like part of her family now.

I have attended all of the memorial events with Arlett and the parachute regiment events all over Normandy. I often visit the Bayuex and Ranville cemeteries as well as Utah beach. That’s kind of where it all began for me.

How did you learn of Billy Fiske?

I attend events run by the Royal British Legion all over the UK and France as I am a Legion member myself. Then one day in October 2009, work took me to Chichester. I finished my work early that day and noticed a place nearby, the Tangmere Museum, where Billy Fiske flew from. I turned up and was about to pay the entrance fee when a staff member said, “We close in an hour”. I replied, “Ok, not to worry. I will pop back tomorrow”. With that, he replied, “Tomorrow we will be closed for the season and won’t open again until next March”. I said, “Ok, I will pay my fee and wiz around quickly”. Whilst I was walking around, I see the Billy Fiske corner and read his story. I was saddened by his loss at such a young age and was impressed with his amazing background in winning multiple Olympic gold medals.

At that point, I overheard a conversation with the staff about the nearby control tower that was being offered to the museum for £1 per week. I heard it was too much for the museum to take on and that it was going to become a housing estate. At that point, I apologized for intruding and asked about the conversation that was taking place. They kindly filled me in with the details. By this point, the museum was closed, and we were still chatting away. Before I left, I committed to trying to save Tangemere Tower. 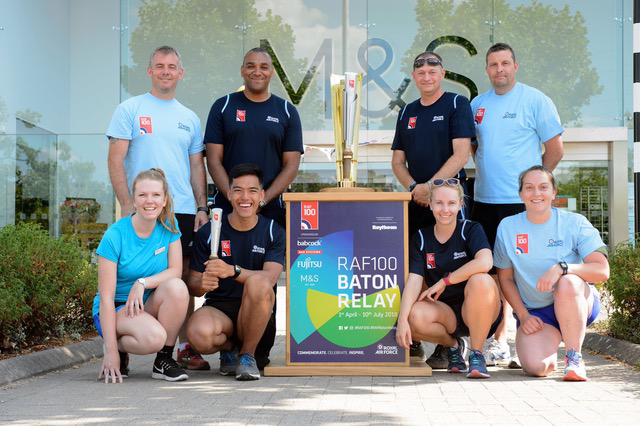 I began by sending many emails to the Council of English Heritage National Trust and seemed to be going around in circles, so I got in touch with several key people; Dillip Sakar, MBE and Joan Murry (Douglas Bader’s second wife) as well as various others to request help. I got useful feedback and some key points as to what I should do that might help. This was in 2009. I kept on and on communicating with everyone, almost daily. I even threatened to chain myself to the tower to save it. Each time I visited the tower, I could see the building site getting closer and closer to the tower, not knowing if one day I would turn up and it would be flattened.

Then by early August 2011, I finally got a response to say it was being given Grade II listed status. My hard work and the tireless assistance of others had finally paid off.

Once the tower had been saved for the future, I was not sure what would happen next. Tangmere has so much history. Our new King, Charles III, learned to fly at Tangmere. There was lots of SOE involvement at Tangmere, including many air-speed records. 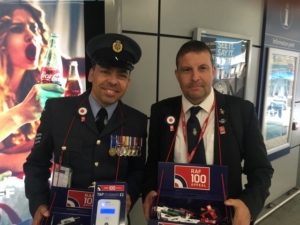 Mark the day after the RAF100 Relay in London, fundraising with a friend.

I decided to learn more about Tangmere Airfield and especially the events around Billy’s death on 16 August 1940. I learned much of that fateful day and of the two men that rescued Fiske from his burning plane after he had managed to set it down around the perimeter of the airfield. Both men later received the George Cross for their bravery. After being rescued, Fiske was taken to Royal West Sussex Hospital in Chichester and was apparently sitting up in bed that evening, chatting away with friends and staff. It was tragic to know that he passed away just the following day. I made a promise to visit both the Billy Fiske grave site and the Tangmere crew grave sites every year to say thanks and pay my respects. I take on the ongoing task of keeping Billy’s gravesite clean, adorning it with the stars and stripes as well as the Union Jack and the RAF wreaths.

Like Billy Fiske, I also have the passion for flying and can be found flying most Saturdays from an airfield that was home to Americans during WWII.

I also have had great experiences with the only flying Battle of Britain Hurricane R4118, owned by James Brown. And now “pegs” the two-seater Hurricane that is part of this Hurricane Heritage run my Mike Collett from Ultimate Aerobatics.

A few years went by since Tangmere Tower had been saved. I visit it every year to take pictures. One day, ‘Save Tangmere Tower’ popped up on my Twitter feed. I made contact and explained to the account holder that I had already saved Tangmere Tower. Matt and I got to chatting and I learned that this was an effort to restore the existing tower. he was out training for a marathon and struggled in training but lent against the tower for a rest when Matt thought, “Hold on, if these guys could do the unbelievable, then so can I”.

He found strength in that and promised to save the tower. We are all working together to restore the tower @savetangemertower on Twitter. Matt then started up a charity page to make people aware of our adventures. I then contacted Dan Snow, a well-known historian from TV (HistoryHit.TV) and he did a small video to help us to get some coverage. We now have enough money in the charity pot to start Phase One. This stage will be to survey the building and to ascertain the state Tangmere Tower is in and what needs to be done. 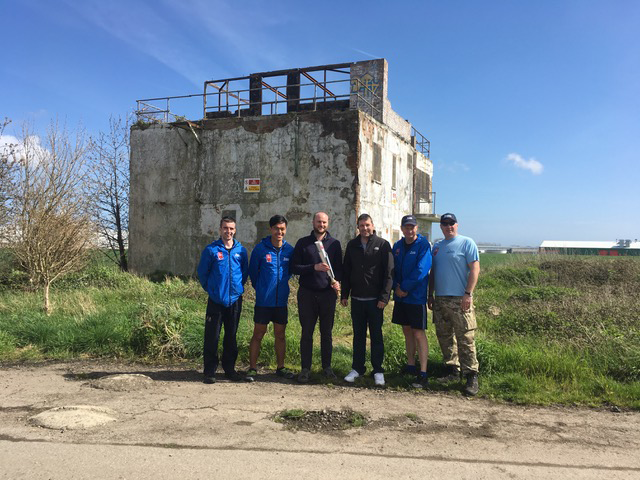 Mark James joins the RAF100 Baton Relay Team at Tangmere Tower the month before he joined them on a weekend.

What else can you say about your experiences with the RAF?

I was also part of the RAF 100 Baton Relay Team in 2018, covering 100 days of 100 miles between RAF stations, finishing at Horse guards Parade ground in London, at the 100-Year anniversary Flyover at Buckingham Palace. I only did one small part from the old former NATS at West Drayton to the new NATS building in Swanwick the new home of NATS. I have also met our new King some years back and handed him a poppy that was dropped out of a Lancaster bomber that flew over when I was at the opening ceremony of the Bomber Command Memorial in London.

Whilst all these amazing events were happening, I decided to do my family tree and found out my great grandad was in WWI as one of the first ever tank drivers and mechanics and did a few major battles on the front line in France and Belgium. He was shot a few months into his tour and ended up in a hospital in Abbeyville for three months where he was patched up and sent back to the front line, joining another tank company. We have managed to trace his whole route and battles he took place in. He survived the war and died at 98 years old. I also lots of volunteering for a food box and also put out twenty-two poppy boxes in my local town dressing the memorial and lamp post with large poppies for Remembrance Day every year.

I had the privilege to know a RAF veteran from WWII who was a bomb aimer in the Lancaster Bombers. He did 22 sorties in a Lancaster. I took him to Members Day at Hendon Museum every year and Remembrance Day every year. I loved listening to his amazing stories. I have done some running for charity for “The Few for the Battle of Britain” and have been friends with some of the woman who served in the ATA. Ferrying all types of aircraft around the UK during the second world war. Sadly, they have all passed away now.

Mark James can be found on Twitter at @DTV_Broadcast