On 12 July 2017, I took command of the 501st Combat Support Wing at RAF Alconbury then immediately drove to RAF Fairford so I could oversee the Royal International Air Tattoo (RIAT).  While attending the RIAT Gala Dinner, extremely jetlagged but happily enjoying cold beverages, I saw this RAF Group Captain who looked a lot like one of our old USAF Assistant Secretaries for Installations, Environment and Logistics – Kevin Billings.  I had not seen Kevin since our days in the Pentagon about a decade ago but was pretty sure he was a consultant back in the US so I thought it was pretty hilarious I saw his British doppelgänger and was going to get a picture with this individual.  I built up enough courage to go visit the RAF Group Captain to introduce myself and asked if anyone ever mistook him for Kevin Billings.  The RAF Group Captain laughed and said it happened all the time because he was Kevin Billings.  Needless to say, I was completely shocked to see Benedict Arnold…I mean Kevin decked out in RAF gear but had a great time catching up with an old colleague and learned about his role as an honorary member of the RAF.  The most memorable story Kevin shared was about Billy Fiske and I have been fascinated ever since, especially since I have interacted with British military forces throughout my USAF career. 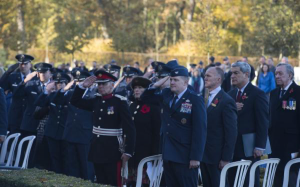 I started my USAF experience while attending the Pennsylvania State University on a Reserve Officers Training Corps scholarship in Architectural Engineering.  I was fortunate enough during my third year of school to be selected as a University of Leeds exchange student to study Architecture and Civil Engineering.  I got to live in a flat, shop at local stores to buy food, spend lots of time in the Bricklayer Arms (studying), travel all over the UK, and during my spare time I attended class.  While I sure I did not impress any of my UK professors, I learned a bit about British architecture and engineering, but I immersed myself in British culture and loved it!  I made a lot of friends and definitely look back fondly at my time in Leeds. 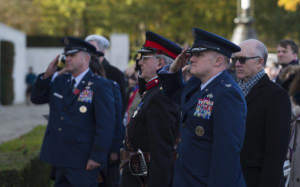 Soon after, approximately a year of detox and diet after my exchange student experience, I was commissioned as a Lieutenant in the USAF and served as a Civil Engineer.  I deployed all over the world throughout my career – I specifically remember deployments to Saudi Arabia, Qatar, and Iraq where I served side by side with Royal Army Engineers and the RAF.  We worked hard and we played harder.  I spent many hours in the makeshift RAF pubs: the Cock & Pullet at Prince Sultan Air Base and the Muffinn at Al Udeid Air Base.  We figured out how to solve many problems together but unfortunately nobody wrote down what we said so all this great work was lost.  I truly enjoyed flying with the RAF, especially C-130s between Baghdad and Basra – I have never experienced weightlessness and significant g-forces in a large aircraft until flying with the RAF! 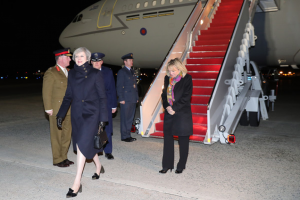 Another great experience I had in the USAF was when I served as a group commandeer at Joint Base Andrews and got to greet Heads of State from all over the world coming to visit our President.  My most memorable experience was greeting Prime Minister Theresa May for her first meeting with President Donald Trump.  She arrived while it was zero degrees (or minus 17 degrees Celsius as you would say in the UK) and I am sure the visit heated after my greeting.  It was also pretty cool to find out I became a British celebrity for at least one morning when my picture was on the front page of several British newspapers and shown on Sky News – I was the good looking (and warm) bloke in blue! 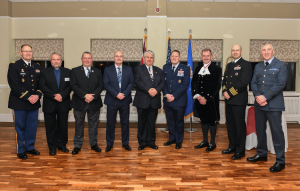 Probably my most memorable assignment in the USAF was as the 501st Combat Support Wing Commander in the UK.  I led over 2,000 American, British, military and civilian Airmen at multiple bases across the UK supporting our rotational bomber, intelligence/surveillance/reconnaissance, and command and control missions.  The greatest memories I had was the birth of my second daughter at RAF Lakenheath (no she is not a British national, just has a British Birth Certificate), my twins attending the Ermine Street Church Academy, participating in multiple Cambridge American Military Cemetery Memorial and Remembrance Day ceremonies, attending many civic receptions, meeting RAF World War II vets and hosting RIAT – where I ran into Kevin for three years straight and learned so much about Billy Fiske! 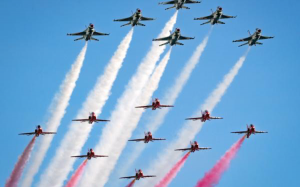 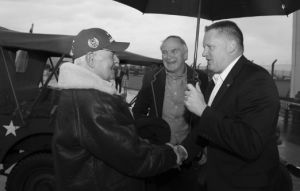 The US and UK have a special bond – there is nothing else like it in the world.  While our leaders do not always get along, the people of our countries always find a way to work together and build upon our great friendship.  We joke about how America won independence from the British, the British burned down the American Capitol, America invaded the UK during World War II and the British invaded America with the Beatles – but our histories are forged together overcoming significant challenges and hardships year after year fighting for freedom and democracy.  The Billy Fiske Foundation highlights a positive inflection point in the US/UK relationship and I am proud to be associated with this organization.  I wish everyone the best during these unprecedented times and look forward to many engagements with my British colleagues to carry on what Billy Fiske started back in 1940. 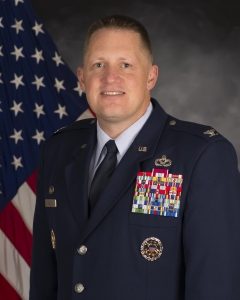 BrigGen (select) William H. Kale III is the Chief, Air Force Liaison to the House of Representatives, Office of the Secretary of the Air Force. He manages Air Force interactions with Members of Congress and their staffs in support of Air Force programs and Congressional oversight travel.

Prior to his current position, he served as the 501st Combat Support Wing Commander responsible for the administrative and/or operational control of seven installations serving more than 14,000 personnel throughout the United Kingdom and Norway. Colonel Kale oversaw a mission portfolio which operated and maintained a forward bomber operating location, stored and moved theater munitions, provided global command and control communications, enabled NATO training and exercises, and supported strategic and theater intelligence organizations.

BrigGen (select) Kale entered the Air Force in 1995 as a distinguished graduate of the Reserve Officer Training Corps from the Pennsylvania State University.  He has commanded at the squadron, group, and wing levels. He also served on three headquarters staffs and as a legislative fellow.

The Ties That Bind, by Johnny Wheeler